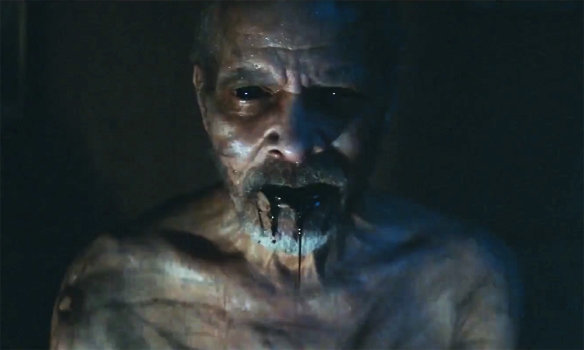 Theatrical horror releases have been pretty thin this year so far. So when I saw the trailer for It Comes at Night, I couldn’t wait to get out and see it. The limited cast and ambiguous threat had me hoping for something like It Follows, but the film that was advertised wasn’t exactly the film I saw.

It Comes at Night centers around a family living in a post apocalyptic world where infection lurks around every corner. The film opens with the family being forced to kill the diseased grandfather.  It’s an introduction that packs an emotional punch and sets the tone of the movie quite well.

From there on, our young protagonist Travis (Kelvin Harrison Jr.) struggles to come to terms with the emotional reality of the situation. He is overcome by ghastly nightmares involving the sickness and his grandfather. Then one night a man breaks into their home. His parents (Joel Edgerton and Carmen Ejogo) and the intruder, Will (Christopher Abbott) form a tentative agreement to pool their resources. Will retrieves his wife and child (Riley Keough and Griffin Robert Faulkner) and the two families begin living together. At first, things are great, but then suspicion and paranoia begin to propel them all in a violent direction. 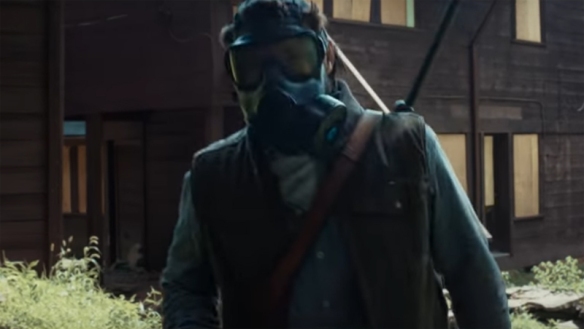 It Comes at Night has a lot going for it. The performances are top notch. I was especially partial to Harrison and Keough. All of the characters are well rounded and they all feel like real people. The relationships between the characters and the mounting tension create a palpable sense of dread. I’d compare It Comes at Night to The Walking Dead. Both rely on characters in desperate situations facing heavy moral dilemmas, where neither party is right or wrong.

In addition to the characters, the architecture of the cabin allows for a unique setting. With its narrow passages, woodwork, and the surrounding forest it presents a wide range of cinematography options. 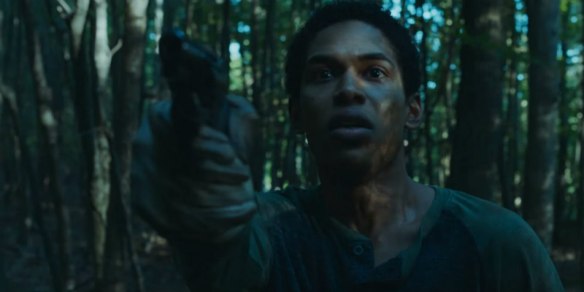 The soundtrack consisting of a lot of low key drumming also stands out. It’s a sound I definitely haven’t heard in any other recent horror movie, and its a nice break from the usual orchestral or synth music that seems to pervade the genre.

Unfortunately, for all of its positives, It Comes at Night still doesn’t feel like much of a movie. It was halfway over before I could even figure out exactly where the plot was going. It’s only about 90 minutes, but it feels about twice as long. The supernatural threat alluded to is nonexistent. All of the nightmare fuel imagery is from Travis’s dreams, and those dreams are a rare occurrence throughout the film. In fact, not much happens in the movie at all. The characters are almost enough to make up for this, but not quite.

I tried to pinpoint why this film felt so lackluster for me, because on paper I should love it. Usually, psychological slow burn films are my favorite, but this one didn’t stick the landing. I think it’s because many of the scenes don’t serve to drive the story forward, so it starts to feel stagnant. When the climax finally came, it was about what I expected. Then it just sort of ends. Everyone in the theater started grumbling, saying things like “That’s it?”. I liked It Comes at Night, and I’m glad it’s out there because it is something fresh in this landscape of Alien and Annabelle sequels. Just don’t expect it to live up to the hype.

Sun Choke is the second feature by writer/director Ben Cresciman. This horror/thriller follows in the footsteps of other abstract films of late such as Darling and Proxy. Like these examples, Sun Choke focuses on the deep-rooted dysfunction of an individual character, rather than the tangible horror of demons or killers.

The story follows Janie (Sarah Hagan), a young woman who lives under the control of the possessive Irma (Barbara Crampton). Irma gives Janie increasingly bizarre treatments for an unspecified condition. Irma subjects Janie to vile looking smoothies, magnets, and some grueling yoga sessions. Janie goes along with all of this until she is given some freedom. One day, Janie is allowed out and she spots Savannah (Sara Malakul Lane), and initially mistakes her for a doppleganger. Feeling drawn to Savannah, Janie begins to follow her every chance she gets. She attempts to assume her character. As her obsession grows, so do her violent inclinations. This sets all three women on a blood soaked path of madness. 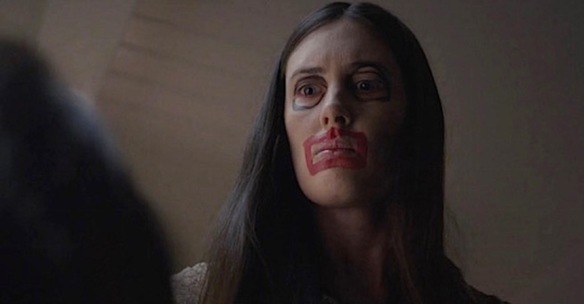 The film features bold performances from all three women. Barbara Crampton is particularly compelling as the caretaker whose motives are never quite clear. Sarah Hagan’s performance compliments Crampton’s. Hagan rocks between wounded naivete and animalistic insanity. Sara Malakul Lane completes the triangle with her sexy and compassionate demeanor.

Sun Choke may appeal to a rather select crowd, but those with a taste for psychological arthouse are bound to love it. The film is most reminiscent of Bergman’s Persona. There are many parallels including an exchange of personality and the bitter love/hate relationship between a patient and a caretaker. While Sun Choke may not be Persona, it is a great film in its own right. It is full to the brim of layered characters, poetic images, and unrelenting tension. This is a film that sticks with the viewer and demands to be analyzed and explored.

What did you think of Sun Choke? Have any recommendation similar to this film? Let me know in the comments or on Facebook or Twitter.

Nina Forever is a macabre romance about what happens when old loves and old memories refuse to die. The film follows in the footsteps of other recent zombie love stories like Life After Beth and Burying the Ex. Unlike those films, Nina Forever is not a fun romantic comedy. It is a profound and painful journey through a relationship that is doomed to fail.

The film follows Holly, a young woman with an attraction to death. Her morbid fascination causes her to fall for Rob, a formerly suicidal man who is still grieving for his dead ex, Nina. Their relationship is great at first. However, when they hit the sheets, Nina comes between them… literally. In a grotesque scene worthy of David Cronenberg, Nina somehow grows like a plant from the bed. Of course Holly and Rob are stunned and terrified. Nina wastes no time accusing Rob of cheating on her. She then proceeds to berate Holly. Rob unsure of what to do, ends up doing nothing. His inaction results in Holly dashing out in anger. The next morning she returns prepared to tackle their little “Nina” situation.

The pair spend the rest of the film attempting to negotiate their relationship around Nina. First, Holly tries to make Nina part of their life together. She does this by getting Nina’s name tattooed on her and by including Nina in their sexual escapades. When that doesn’t work, they try ignoring her. Finally they try making peace with Nina’s death, but the presence of Nina is inescapable. Ultimately, Holly ends up being the one stuck with Nina, forever ending her relationship with Rob. 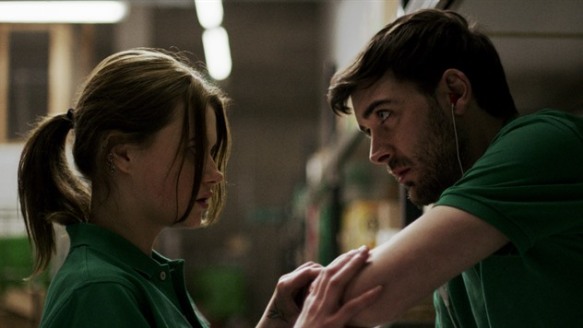 It’s hard to say for sure what exactly the message is behind Nina Forever, but a few things are clear. Nina represents the past that the characters can’t move on from. In Holly’s case, Nina represents an obsession with darkness. Nina herself insists throughout the movie that she doesn’t want to keep coming back. She wishes to remain dead. Nina’s existence ranges from painful to numb. The film doesn’t provide any clear cut answers, but it does raise some excellent questions. Do the living drag on the memory of the dead for our own benefit, rather than theirs? Can a person overcome their past, or will it always just keep popping up like Nina?

The actors are all superb. Cian Barry plays the brooding Rob well. His is not the most exciting role in the film, but his personality gives it a bit more edge than it might have otherwise. Barry has smoking hot chemistry with his co-star Abigail Hardingham who plays Holly. Hardingham stands out as the vulnerable young woman with many layers. She shines in every scene she’s in. Don’t be surprised if she starts showing up in more and more indie films. Finally, there’s Fiona O’Shaughnessy as Nina. With her captivating features, and unique voice O’Shaughnessy is the perfect Nina. She provides witty banter, all while being sexy in the most creepy way possible. 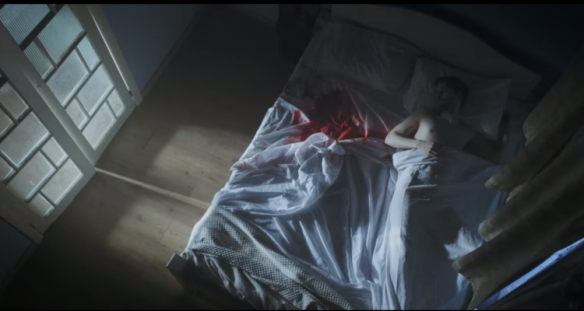 Another major score for Nina Forever is the music. “Nina” features music from indie rockers like Amanda Palmer and Minnesota band The Ladybrugs. The music contributes to the hip vibe of the overall film. It adds a layer of fun, to an otherwise sad movie.

Nina Forever is a love story for those who prefer their romance blood soaked rather than sugar coated. While perhaps not entirely cohesive, this film by Chris Blaine and Ben Blaine has plenty to offer. At its best, Nina Forever is an examination of what it means to be alive and in love. While it is not a scary film, the blood, the undead girlfriend, and the general weirdness more than solidify its place in the horror genre. Fans of these mumblegore films should keep their eyes peeled for the next Blaine brothers project.