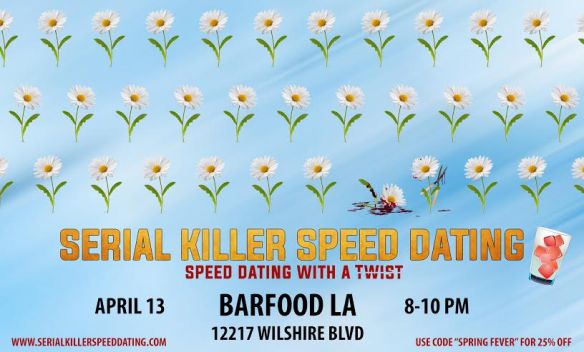 For those unfamiliar with Serial Killer Speed Dating, It’s an actual speed dating event, in which a participant will go on numerous mini dates over a two hour period. There is a twist however, hidden among all the participants is a killer! You now have to guess which one of the participants is the killer, all while looking for a possible match. 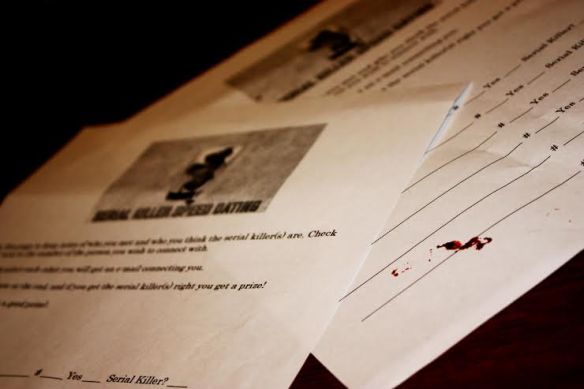 Serial Killer Speed Dating has turned out to be a real hit as it separates itself from both online dating and other speed dating events. “Part of the appeal of speed dating is that you get a face-to-face date,” continues Horwitz. “The twist that it might be a killer sitting across from you gives it just a little bit of spice.”

Serial Killer Speed Dating first appeared at Scare LA in August 2015, and has since been brought back several times over the last few months, each one a success. This is one of those events that really sets its self apart from any other interactive haunt type events. Serial Killer Speed Dating has a very bright, exciting future and we can’t wait to see what it has in store, or the amount of bodies left behind!

Tickets are $20 and there is also $10 minimum at the bar. Be sure to use the promo code “SPRING FEVER” for 25% off the ticket price. If you want to come and check out Serial Killer Speed Dating, but wish not to participate, you’re welcome to do so. You will be required to do the $10 minimum at the bar! You can buy tickets and get more info at www.serialkillerspeeddating.com ! This event will sell out, so buy your tickets ASAP! 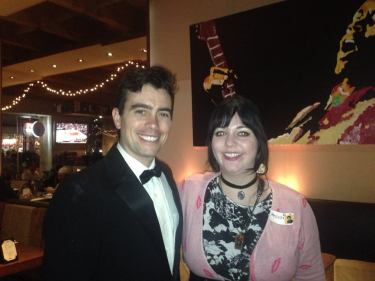 Recently, I attended Abel Horowitz’s event, Serial Killer Speed Dating (@skspeeddating, http://www.serialkillerspeeddating.com), for the second time. For those who don’t know how Serial Killer Speed Dating works, here’s the gist. It’s basically regular speed dating, but with a twist. There’s a serial killer thrown into the mix. You have five minutes with each date to get to know them and figure out if they’re a serial killer. Throughout the night victims are killed off one at a time, usually in a dramatic fashion. For example, after only a couple dates, a girl came stumbling out of seemingly nowhere. She was covered in blood. She proceeded to collapse and die in front of a captivated audience. The crowd erupted into applause, obviously enjoying themselves.

If I’m honest, and I am, I enjoyed these theatrical moments better than the actual dating. It’s surreal to see people “dying” in a swanky little Santa Monica bar. The shock on the faces of the other patrons still has me laughing. My personal highlight of the evening came when I became an accomplice in the murder mystery. On my last date, I was given a small glass of blood that I was told to hide. With the blood, came a note informing me to give my date the drink and then scream when he starts choking. I did as I was told, and when the time came I let out a shriek worthy of any scream queen. My date who turned out to be one of the killers fell to the floor in a campy display of death. This signaled the end of the evening. Those who guessed the right killer or killers, were awarded a prize.

Now, despite my preference for blood over romance, that’s not to say I didn’t have a blast during my dates. It was exciting to get to meet so many people from different walks of life. Between my two experiences with S.K.S.D I met an ice cream maker, a talent manager, a guy into something called “Ecstatic Dance”, and a Meat Loaf impersonator. Almost every single guy I encountered was beyond nice. Most of them were interested in horror on some level. That was nice, because it gave us common ground and a good place to start the conversation. I’m glad I got the opportunity to talk to so many fascinating characters, even if I didn’t meet the serial killer of my dreams.

Ultimately, Serial Killer Speed Dating is a great event for love seekers and horror fans alike. For many, people outside the horror community seem to perceive their macabre interests as “weird”. This can make dating, and especially speed dating difficult. Serial Killer speed dating offers a haven for the so called freaks. We can date without the fear of judgement. We can be open and relaxed about our interests. So if you’re in the market for romance, some bloodshed, or even just plain old fun, I highly recommend attending the next S.K.S.D event.

There was an error retrieving images from Instagram. An attempt will be remade in a few minutes.